Thanks to the marvelousness and unexpected speediness that is Chessex Dice, CATS&CATS was able to be fully fulfilled within about 5 and a half weeks from the close of the Kickstarter campaign--two months early! MEOW!!!! [ KS launch Feb 1, KS end Feb 15, KS fulfilled Mar 25]

Thank you to every single one of you zany folx who joined the Kickstarter campaign and to all of you who are just now discovering CATS&CATS! Also many thanks to all of my friends who encouraged, strong-armed, and supported me during this bewildering process--thank you Camdon, Hamish, Stephen, Tim, Tiffany, Kat, Rob (and too many others to name).

How did CATS&CATS come into existence?

I still don't know how to exactly talk about this project. One of my friends described it as my "hypomanic cat love letter" and my partner called it "performance art meets indie rpg" and the combo of those two is really very accurate.

The first seed for CATS&CATS was actually planted in March 2016, almost exactly 4 years before the Kickstarter was fulfilled! At that time it had no "ruleset" (such as it is) and was diceless. It had a different name (awful) and was made in Excel. It was a joke, as at the time I had no desire to ever make any games ever, so to prove it I did this. HA. Joke was on me. 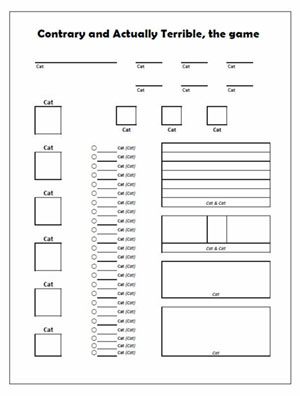 You can see that the character sheet overall did not change much in basic content, but it did go through four iterations in InDesign to get the layout and graphic design to the final form. I am actually very very proud of how the final character sheet looks!

I had kind of forgotten about CAT until PAX Unplugged 2018. I was talking with a friend, Camdon, about cats, as I am wont to do. Somehow I remembered this "game" I once made, and told him that he could play regardless of his sad cat allergies. He and my partner Hamish got very silly and demanded there be dice and that I sell it, which I said was ludicrous. Post-con, Camdon kept tweeting about it, which made me softly start pricing out custom dice... and found out how expensive they are in small batches! And then friends on Facebook started urging me to do a Kickstarter, which I said was ludicrous. And then, for some reason I have yet to figure out, I actually did it. The rest is history, as they say. 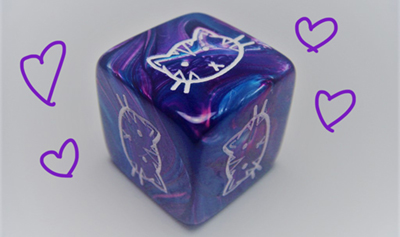 I was very terrified, both during the campaign and during fulfillment. I was convinced that everyone would hate me. The whole process has been stressful and scary, but also very validating and rewarding! There still is a little bit of that fear, though, haunting me.

The CATS&CATS Kickstarter campaign finished at 311 backers, $3,363, and 1121% of the original goal ($300). It funded in the first meower! I was completely unprepared for it to get so popular! The original plan was to cap it at 40 physical rewards, and I was not confident those would even get close to filling. I quickly added 40 more. After a couple days of insanity, triple checking cost projections, and checking with my dice manufacturer (Chessex) to be sure they could handle a large order, I opened a pile more rewards and an add-on. Suddenly my little project that should have been a breeze to fulfill as now a huge and heavy time-suck. Weee! But even so, excited weeeee!

I nearly added on a (very cool!) stretchgoal, but luckily realized in time that I would not actually be able to pay for it because somehow I had left out the 10% Kickstarter fee. Getting exciting and adding too many or too big stretchgoals is one of the major ways that projects go down in a fiery mess! Always check your numbers, folx!!!!! 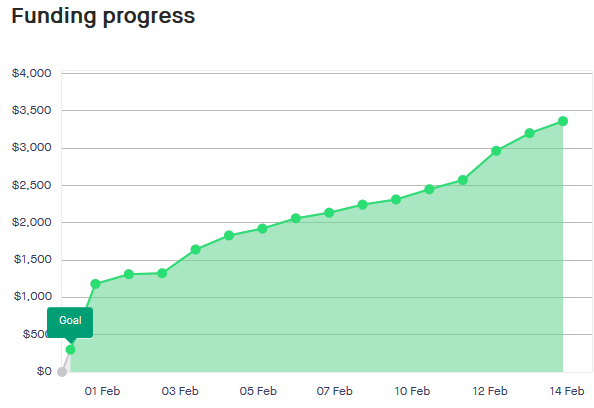 It had a pretty steady climb throughout the whole project, which is somewhat unusual, but I think might have been a product of a 2-week campaign. The early leveling-out was due to the lack of an initial $8 level. I suspect the lack a big 48hr spike is because most folx backed right away or weren't really going to back anyways--CATS&CATS was very much an impulse pledge.

Someday I'll make a Kickstarter video that will have a higher completion than 65%. I really thought this one was going to do it! Oh well. I'm shocked, tho, but HOW MANY PEOPLE CLICKED ON IT. Sweet Sagan, a LOT of people checked out CATS&CATS!!! You can view the 30 second video on the campaign page: https://www.kickstarter.com/projects/daytheelf/cats-and-cats

It was interesting to me that most of my backers came from Direct Traffic (?) and Facebook, with low uptake on Twitter. This was basically the opposite from Dinosaur Princesses. I think it's because Hamish (co-creator of Dinosaur Princesses) has a bigger Twitter reach than me. ZineQuest only brought in 7 folx. 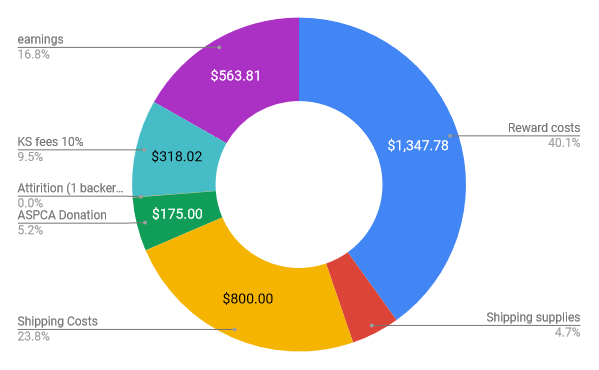 Here is my final financial breakdown. I ended up netting more than originally expected due to better bulk rates on dice (cuz of the unexpected huge number of backers) and a surprising lack of dropped pledges or shipping overcosts (in my planning projections I made sure to have high estimates for these so that I didn't end up with negative money). Even so, given the many, many hours that fulfillment took, I definitely was making under minimum wage. That's fine though--this was a project of mania and now I have a small nest egg to invest in my next project.

How can I get physical dice and the game?

Unfortunately, the dice were Kickstarter exclusives and I don't have enough left over to properly open sales for them. I probably will have a very few number of physical games (and dice) with me at cons for sale, so if you see me shout out "CATS&CATS!!!". My next con will be PAX Australia 2019!

Aside from that, you can get the PDF version right here on itch.io! It comes with print-and-fold dice, so you can still fill that 1c6 hole in your heart.

I have several games planned, but all of them are delayed until after my upcoming move across the world to New Zealand.

Thanks again to everyone who have supported me and this project, and thank you to all of you new people who have just join in!